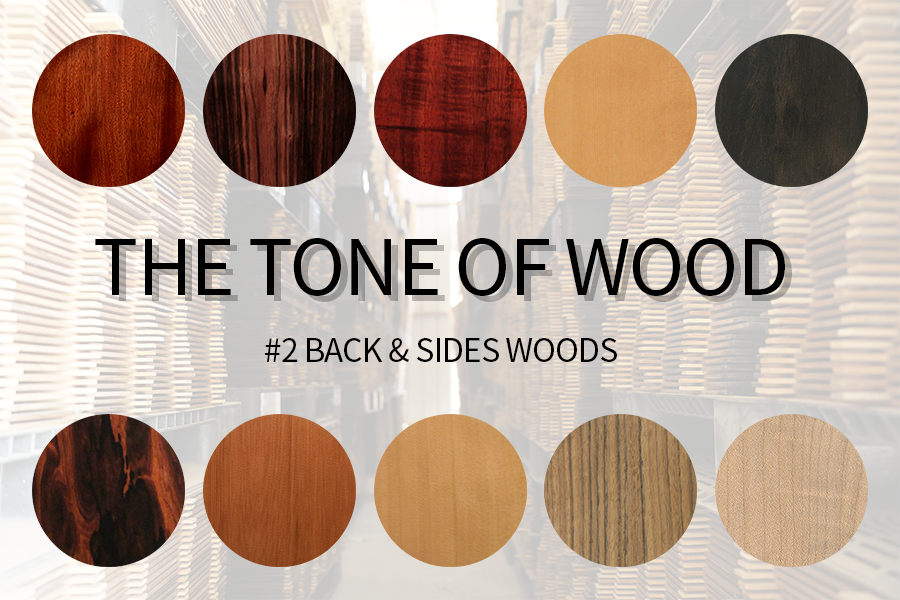 While there are many details that determine an acoustic guitar's sonic profile, the two most important factors are the body shape and body wood. Each type of body wood carries its own unique tonal properties and the natural aesthetics of these woods can make a guitar almost as inspiring to look at as it is to play.

In the previous months, we reviewed the various styles of acoustic guitar body shapes offered by Cort and the essential tone wood types used for top material. For the second part of the Tone Wood series, let’s take a look at the different tone woods for acoustic guitar back and sides.

Also referred to as Bolivian Rosewood, Santos Rosewood, and Morado, Pau Ferro sometimes exudes an exotic look with its colorful mixture of brown, yellow and black in its figuring from a relatively smaller sized lumber. Due to its higher density and weight relative to Rosewood, Pau Ferro produces a quick transient attack with a dry yet bright tone and an emphasis on the treble side of the sonic spectrum. The responsiveness of Pau Ferro suits a variety of body shapes and different top woods exceptionally well to produce a wide range of sounds.

Available in various highly figured types such as Quilted, Flamed, and Birdseye, Maple has a bright yet light color which makes it ideal for applying various finish colors. Due to its stiffness and high damping character, Maple has a transparent sonic quality compared to other woods used for back and sides. Generally bright and clear, Maple produces a refreshingly brilliant sound with a fast responsiveness not found on other woods.

With its striking grain patterns and colorful good looks, Koa wood is coveted not only for its beauty but also for its unique sonic character. Often compared to Mahogany for its strong midrange, Koa exhibits more brilliance with a stronger emphasis on the treble register. Slow in its aging process, once Koa is properly cured it produces a distinctive mix of lush midrange with a sweet treble that makes it ideal for ukuleles as well as tops on top-of-the-line acoustic guitars.

A native wood of Australia and a member of the Acacia species, Blackwood is also commonly called Tasmanian Blackwood and has been compared to Hawaiian Koa. Featuring looks reminiscent of Koa, Blackwood produces a dry yet warm midrange which can be described as an ideal sonic mix of Rosewood and Mahogany.

Ziricote has a look that is comparable to Brazilian Rosewood in its color and grain patterns and is generally heavier and denser than most Rosewood species. Tonally, it is similar to Striped Ebony and has a bright character with deep low-end. This sonic quality makes it ideal for use on both classical and steel-string acoustic guitars but it's known to be a difficult wood to work on due to its density.